Above a buzzard flies over the edge of town. I am mid country – on the line, further east no buzzards, but to the west more. There is another fault line here – chalk and cheese – the saying is supposed to come from the lush vale of clay supporting fine milch cows and the downs around offering quite other prospects. Great hill forts steer the chalk hills round the sodden vale, beacons disguised as trees beam wearying messages about.

A town of green sand stands high above villages of brick and yellow stone, awaiting the arrival of trucks bigger than cottages which keep its high street alert to corporate dangers. Badgers clean out their older hamlets in the evening dark. Worms, having read their Darwin, continue making the history of the world, unaware that they loom large as breakfast for the brock, and feature little in strategic deliberations about sustainability.

So the global and the local meet. Nature and culture spell out particularity.

And our deliberations spool around the smallest and largest questions. Why do badgers matter? How do we create a culture of wanting to care? How do we nurture a new mutuality between nature and culture? 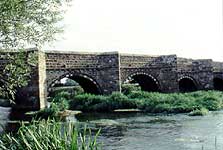 Emerging from an imperative in ecology, Common Ground set out to explore the arena where nature and culture meet, and to excite people to stand up for their own surroundings. We recognised that unless everyone joined in the grand project, unless we all began to change our ethical relations with nature and each other, then failure on a grand scale loomed ­ life would be worse for all. So much of the environmental action we had personally been part of had become embattled, simplistically scientised, more and more about the rare, the endangered, the spectacular, the exotically exciting.

Our arguments began to coalesce around the ordinary. This is where most of us live our lives, where most of nature is, and unless we look after the ordinary, the rare cannot survive. Unless we do something for our own places and to change ourselves, how can we expect others to change their expectations?

How do we help people to articulate the importance of the everyday, re-sensitise them to the value of the ordinary, reinvigorate debates about the commonplace?

We have focussed upon values, the local and upon place. We have tried to give people courage to make a start from where they are and what they know. We have worked through projects, publications, events, exhibitions, through ideas, information and inspiration.

We chose from the beginning to cross all kinds of boundaries including working with people from all branches of the arts, to round out our relations, to help us to explore ways of expressing values in the hope that we could weave people’s aspirations towards humanity and imagination as well as environmental ethics.

We are concerned to encourage people to animate their values, to make demonstrative efforts to communicate what is significant in their surroundings and to be tolerant of other people’s values. Everywhere means something to someone.

Place is the messy mix of nature, histories, buildings, work activities, relationships and story upon story. Common Ground has tried to excite people at the local level to say what matters to them, and to encourage the professionals to listen to local knowledge and sometimes wisdom, something increasingly recognised in far off tribes, but not taken seriously here in village or city estate.

We have promoted the idea of Local Distinctiveness, which is about the really local, defined from the inside. It is about meaning as understood through detail and patina ­ the jostling of natural history with history including many things which are not literally visible, recipe, custom, festival, dialect, name, commonplace cultural things. Our pamphlet Celebrating Local Distinctiveness has inspired much activity.

The question ‘What do you value in your place?’ can turn everyone into an expert. Making a Parish Map can help people to come together to chart the things which they value locally, to make their voice heard, to inform and assert their need for nature and culture on their own terms, and to begin to take action and some control in shaping the future of their place.

IConfluence has already brought into existence: river carols written and sung by a new community choir; watery ballads performed in village hall, library and pub; the Fish Cabaret (teenage a capella group, school jazz band, a singing fishmonger); storytelling particular to this river; music for a bridge played by a scratch group – the Cutwater Band. And our composer in residence on the River Stour, Karen Wimhurst, has created lots of new music – spoken histories literally interwoven with a new composition for wind instruments, an experimental piece mingling the sounds of a working mill with percussion and voice, pieces for wind players, percussionist and plumbers on new musical instruments made from plumbing artefacts for a challenging concert based around readings which animate the little rivers which run through your house.

Karen’s new trio – Watershed – are performing her music and that of first-time composers in the valley. We look forward to a concert based on river bird song following a dawn chorus walk.

Impelled again by ecology we are encouraging the names of brooks to be carved onto their bridges with the idea of getting local groups to search out elusive names, to take on the naming using an alphabet especially created for their valley, so every bridge within the catchment using this letterform lets you know which river basin you are in.

A pamphlet Rivers Rhynes and Running Brooks explores local distinctiveness and running water and a poetry anthology The River’s Voice adds a further dimensions to our preoccupation with water.

In Shaftesbury, high above the Stour, everything is drying out after the wettest April on record, a few swallows are arriving, and for the moment, the continuing privilege of living with badgers symbolises a quiet tolerance and care which may have lasted for longer than a thousand years.

An essay about Confluence

Stay in touch with Common Ground